The Three Reasons why you can’t do anything

The old phrase about education being about ‘The Three R’s’ has been around for a very long time, and it pretty much still rings true today. Of course the irony of The Three R’s being ‘Reading, Writing and Arithmetic’ is that two of the three words don’t start with R, however judging by many of the posts on Facebook these days it’s a fair bet a lot of people glossed over that bit at school anyway.

The problem, as I see it, is that there is a new group of The Three R’s that is responsible for many people’s dramas and issues today. People find themselves unable to achieve their goals, be it saving for a holiday, losing unwanted body fat, in fact just about anything relates back to the modern Three R’s:

To take each of these in turn, many people lack resilience: fail to lose 10kgs in the first week of a new gym membership, it’s obvious that the gym is crap and that they need to jump ship and try another one, preferably with free start up sessions. Of course they need free sessions, because every other gym they joined, or meal program they started didn’t work in the first week, so why would you pay for it when it is obviously not going to work?

In fact, why bother at all with going to the gym, when you’re only going to get sweaty and tired, and you’re a little too busy to go anyway, you know, with all the other stuff that you have going on. Work, kids, meetings, Big Brother…

Those people that go to the gym obviously don’t have kids/partners/houses to look after, they’re blessed with the perfect carefree life, right?

They probably can also eat whatever they want whenever they want, unlike you, because you have that…hereditary condition, glandular condition, slow metabolism, incurable disease. (Pick one, or pick them all, whichever fits the bill)

They probably never have to show any restraint, and certainly not for any longer than it takes to walk past the cafeteria at work where they practically force feed you fried food and cakes.

They almost certainly know nothing about respect, they don’t even understand your feelings when you tell them how hard it is to lose weight, and how you simply had to have 15 glasses of wine at the wedding you went to on the weekend? Right? It would be rude not to drink? I can tell you, it would be a damn site more rude to drop dead of a heart attack at somebody’s wedding, just sayin’.

So back to the reason why YOU can’t….anything….

You need to develop some new skills and values, or you simply won’t get to your goals.

Resilience – this falls under the suck it up Sally theory. You had your fun and lazy days, ate all the rubbish you wanted to – now you have to suck it up longer than you want to. Picture a Heavyweight contender, going toe to toe with the champ. How bad he wants to win the title will be shown in whether he can stay on his feet 10 seconds longer than his opponent. Nobody says you have to train for 3 hours a day, but at least have a crack at 30 minutes.

Restraint – nobody holds you down and forces you to eat rubbish – that’s all down to you. Don’t blame your husband for bringing home takeaway – you make the choice as to what food you put in your mouth. If he doesn’t like it or gets offended, too bad too sad. Any partner that deliberately tries to sabotage your health regime should be put on notice anyway.

Respect – this isn’t really about anyone else respecting you. You care too much about what other people think of you anyway. You post something on Facebook and don’t get a comment or like and it’s like the sky is falling in. Respect is all about how you see yourself, what you will put into place to achieve your goals. If you don’t respect yourself, you can kiss it goodbye, whatever it is.

So when you want to come and tell me that you can’t achieve your goals, be they fat loss, improved running times, climbing a dirty big mountain – make sure you’ve been studying your Three R’s – or you might just get yourself some extra homework! 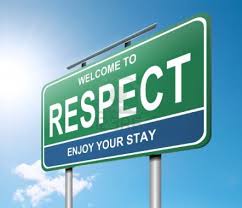