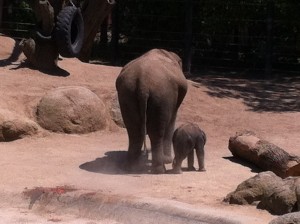 OK, so apart from the obvious, that they can’t read….

I went to the Melbourne Zoo recently and saw the new baby elephant that had been born. Cute and lovely and all that stuff but it did get me to thinking.

The cow (yes, that’s the mummy elephant, not the dairy cow – stay with me here), was very protective, making sure that the baby was always in the shade and even at this early age was showing the baby how to scoop up some dust and throw it over its back. Did you know that elephants do that as a form of sun protection? No? Well, it sort of matters a bit.

Kids, despite the fact that they pretend otherwise, are very observant and are visual animals. They watch, they learn. At different times of their childhood they will be hungrier for knowledge than others, or for different types of knowledge.

Remember, if you have them, when your kids went through a stage of asking, “Why?” after every sentence? Drove you nuts most likely. But that was the kids trying to form a picture of their world and the rules we apply to it. Everything you said, was followed with, “But why?”

Do you remember when your kids stopped asking “Why?”? You probably don’t, it was just a relief to not have to answer questions like you were being interrogated by the CIA.

Part of the reason for that is you were teaching your kids stuff, and they didn’t have to ask why any more, you were showing them.

Now imagine if our elephant mum read the gossip magazines or the weekly publications that promise a bikini body in seven days. Yes, you thought about elephants in bikinis. The message from the magazines would be that the elephant was a social failure for a number of reasons. Let’s think about what an elephant looks like for a minute:

We know that the elephant has all these features as evolutionary requirements for survival, and we never question them, but more importantly, the elephant doesn’t complain about them to her girlfriends in front of the kids or partner, and doesn’t head for the pantry because she doesn’t feel good about herself. She just gets on with eating as required without thinking about it, and eats the variety of foods that will sustain her.

How do you approach the same thing if you have features that the magazines tell you are undesirable? If you have a bigger bum, or your skin isn’t blemish free, and you don’t look like the genetically gifted half a dozen people that we see recycled constantly in magazines, out of 7 billion people on the planet.

You complain about it in earshot of the kids, or worse, you set about eating the very foods what will exacerbate the big bum and blemished skin and excess body fat. You don’t even need to tell the kids “Why”. You just lead by example and they learn. Boy, do they learn.

So my message to you is to start acting like an elephant!

Eat the foods that will sustain you for what you need to do, not until the end of next week.

Be aware of answering your kids’ questions, even when they don’t ask them out loud. They’re always watching and learning from you.

Stop thinking you have to look like a genetically gifted minority of the population, accept that you’re you and you’re different from everyone else.

And stop reading gossip magazines. They really are rubbish. Spend time with your loved ones instead of pretending you live in Hollywood.

Because if you don’t, then that elephant may just be smarter than you!